Multiple sclerosis may be triggered by FOOD

Interesting article about bacteria in food causing MS! I've copy and pasted this article from the Health section of  MailOnline.com.

Multiple sclerosis may be triggered by FOOD: Toxin produced by common bacteria could cause disease

Microbiologists from the Weill Cornell Medical College, New York City, built on previous research that suggested epsilon toxin could trigger M.S.
Epsilon toxin is produced by strains of Clostridium perfringens - a spore-forming bacterium that can cause of foodborne illness
Development of a neutralising antibody or vaccine directed against the epsilon toxin might stop the progression of the disease

The inflammatory disease of the central nervous system is thought to be triggered in a genetically susceptible individual by a combination of one or more environmental factors, but the triggers are still unknown.

U.S. scientists have built on previous studies that suggested epsilon toxin, which is produced by common bacteria, could trigger MS.
Multiple sclerosis - the inflammatory disease of the central nervous system - is thought to be triggered in a genetically susceptible individual by a combination of one or more environmental factors, one of which could be a bacteria found in food. A scan is pictured 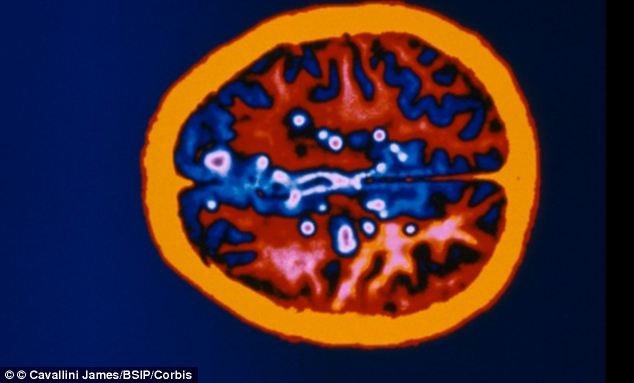 MS is characterized by blood brain permeability and demyelination - a process in which the insulating myelin sheaths of neurons are damaged.

She presented the new research at the ASM Biodefense and Emerging Diseases Research Meeting in the U.S.

‘We also show that epsilon toxin targets other cells types associated with MS inflammation such as the retinal vascular and meningeal cells,’ (cells of the membranes that envelop the central nervous system), she said.

‘Epsilon toxin may be responsible for triggering MS.’ 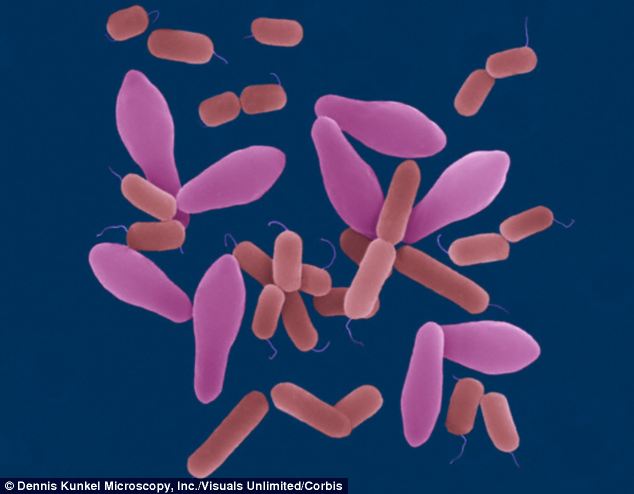 Previous studies have suggested that C. perfringens, and in particular, epsilon toxin, may play a role in triggering MS.

Late last year Dr Linden and her colleagues discovered C. perfringens type B - a strain that is not known to infect humans and produces the epsilon toxin - in a 21-year-old woman who was experiencing a flare-up of her MS.

To further test their hypothesis Dr Linden and her team studied the behavior of the toxin in mice focusing on which cells it targeted.

They discovered that the toxin did target the brain cells associated with MS pathology, but that was not all they found.

Dr Linden said: ‘Originally, we only thought that epsilon toxin would target the brain endothelium cells and oligodendrocytes; we just happened to notice that it also bound to and killed meningeal cells (of neurons).’

‘This was exciting because it provides a possible explanation for meningeal inflammation and subpial cortical lesions exclusively observed in MS patients, but not fully understood.’

They also tested samples of local foods for the presence of C. perfringens and the toxin gene.

Dr Linden said the findings are important scientists now know that the epsilon toxin is a trigger of MS.

Development of a neutralising antibody or vaccine directed against the epsilon toxin might stop the progression of the disease or prevent it from even developing, she added.

MS is known as an autoimmune condition.

This is where something goes wrong with the immune system - the body’s defense against infection - and it mistakenly attacks healthy body tissue – in this case, the myelin covering of nerves.

This can cause multiple sections of the brain and spinal column to become damaged and hardened, which can disrupt the nerve signals passing through these areas.

Exactly what causes the immune system to act in this way is unclear, but most experts think a combination of genetic and environmental factors are involved.

This new study finds that epsilon toxin could be one of the triggers.

My October 2015 Yoga Journal Magazine article has been reposted in the July China Yoga Journal. I was contacted and ask if it was ok to repost and to send them a couple new pictures. Feel free to read it 🙂 if you read Chinese. If you click on the link below the full article […]

We passed our inspections and plan to hold our first class on Tuesday, February 20th. Here is a list of classes for next week. All classes will be $5 this week except for the New Beginner which is a progressive 8 week class. Cost for this one is $59 for 8 weeks. The first week […]

In my opinion this is a neat article I found very interesting. I've shared it with my students and wanted to put it out there for anyone interested. Chuck Cancer and Low Body Temperature Featured in this month's Townsend Letter www.townsendletter.com One of the very common findings I have noticed in cancer sufferers is a […]